Case Summary:
This 46-year-old woman was healthy except for a history of occasional migraine headaches and cigarette smoking. On the day of admission she had fallen down a short flight of steps carrying a heavy box. About 2 hrs later she complained of some neck pain.  Then later that evening developed abrupt onset left sided weakness. She arrived at the emergency room within 1.5 hrs of the onset of weakness. On examination, she was alert, but she had a right gaze deviation (she wouldn’t look to the left side) and the left side was completely paralyzed. She had a normal brain CT scan.

The stroke team was notified, and she was given intravenous thrombolytic (“clot busting”) drug therapy within 1/2 hr of her arrival at the hospital and 2 hrs since the onset of her symptoms. 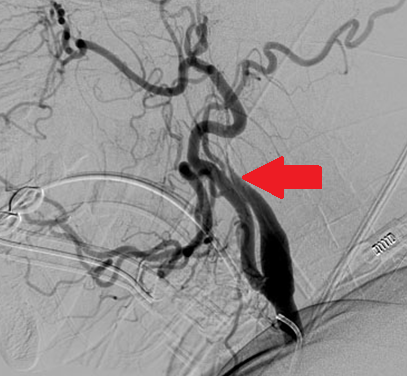 What is cervical artery dissection?

Cervical artery dissection is caused by bleeding inside the wall one of the major arteries in the neck.

This process is thought to be triggered by local injury to the inside layer of the vessel wall. 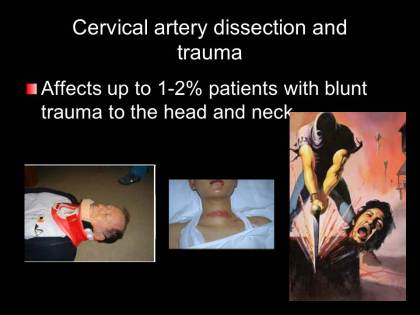 Cervical artery dissection can also occur after minor trauma, particularly in someone with a genetic predisposition: 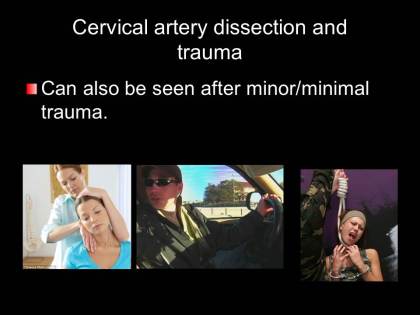 What diseases predispose to arterial dissection?

There are some specific syndromes such as Marfan syndrome, Pseudoxanthoma elasticum and Ehlers- Danlos syndrome type IV that are associated with a weakness in the arterial wall making an arterial dissection more likely: 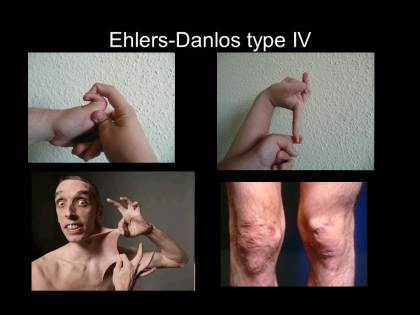 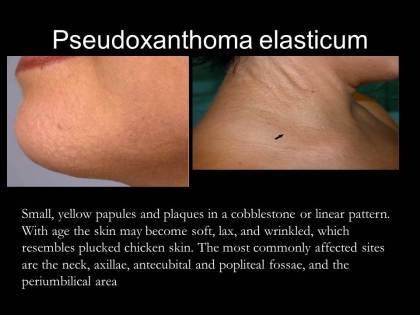 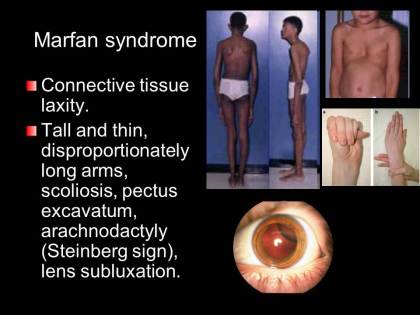 In other cases, the specific cause of arterial weakness is unknown, but there is ongoing research to try to identify genetic links.

What happens after a cervical artery dissection?

Symptoms can be caused from the damaged arterial wall itself (local symptoms) and some affected patients will later develop strokes. 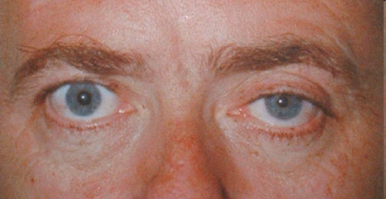 L Horner’s syndrome (small pupil and drooping eyelid) caused by damage to the sympathetic nerve fibers in the arterial wall from carotid dissection. Click here to find out more about Horner’s syndrome and other causes of unequal pupils.

Stroke symptoms only occur in 25-30% dissections and can occur several days after the neck trauma and/or onset of local symptoms.

The arterial dissection narrows the space inside the blood vessel (the lumen), so less blood flow gets to the brain: 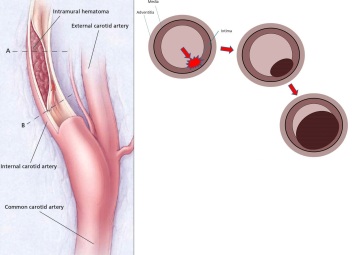 A carotid artery dissection with blood clot inside the arterial wall (left) leading to narrowing of the vessel lumen and less blood flow (right).

Cervical arterial dissections can also cause stroke when pieces of blood clot break off and move with the blood flow only to block small arteries further inside the brain (cerebral thromboembolism), or if the dissection tracks across (and blocks off) an arterial branch (see below): 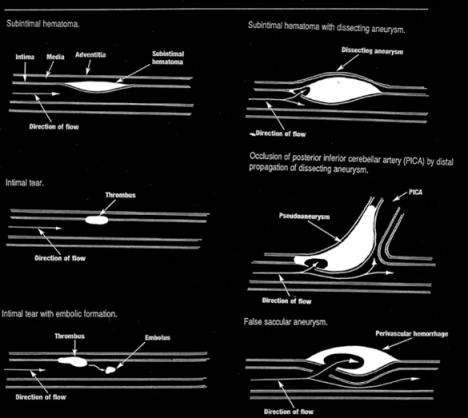 How is arterial dissection diagnosed?

Magnetic resonance imaging is probably the easiest way to make the diagnosis: 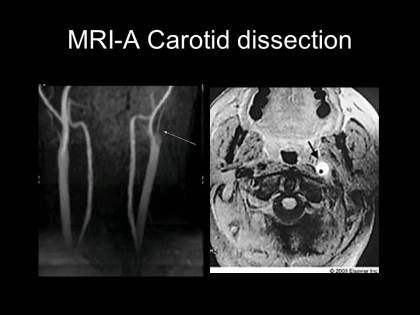 How is it treated?

In most cases the arterial dissection ultimately heals on its own without any surgical intervention.  There has been some controversy surrounding the use of anticoagulant vs anti-platelet drugs for stroke prevention after cervical artery dissection, but most current data favors the use of the anti-platelet drug aspirin: 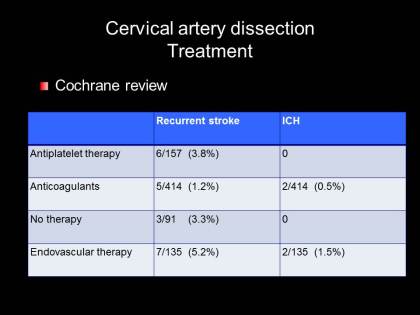 Of course, for patients presenting with symptoms of acute stroke, throbolytic therapy is also an option, and can improve outcome without increased risk in stroke from dissection: 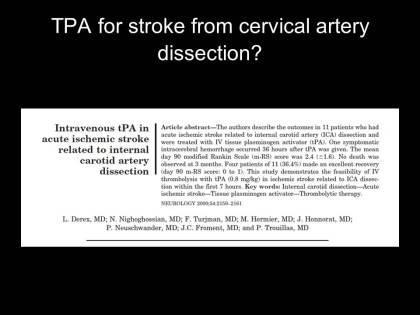 Click here to find out more about cervical artery and dissection and stroke.

Click here to find out what to do if you think your having a stroke. 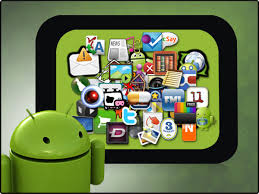